CAUTION: READ THIS ONLY IF YOU HAVE AN APPETITE FOR CORNY SPORTS-FOOD ANALOGIES.

It's not a picnic when playing against Rockville, particularly with Coach Hollies at the helm. Good athletes and good coaching are main ingredients for a winning boys volleyball program, and Rockville is cooking up a recipe for a bright future on par with its outstanding teams of the past several years. Rockville has good young athletes that now know how to play volleyball. Take them for granted next year, then prepare to be eaten alive.

Experience, fortunately, served up a win for Wootton this year. Setters Aaron Yee and Eray Wang adjusted to a change in the usual Patriot lineup in the first set, directing an offense led by Tony Malinauskas, Alex Filie, and Zhenyang Zhang. Kevin Liang contributed a strong all-around performance in the swing hitter position.

The Patriots jumped out to an early lead in game two behind Filie's serving. Eray Wang took over the sole quarterback duties, and, along with Malinauskas, Mark Yang, Zhenyang Zhang and Richard Fan led an effective transition game. Eric Zhang and Chris Wong came off the bench to protect the lead for the Patriots.

Since the beginning of March, the talents of Wootton's younger players have been simmering in the practice gym. Michael Ip, George Ewald, Eric Zhang, along with Chris Wong, got the nod to cook up their own winning recipe, giving the fans a taste of what's on the Wootton menu for the next few years...Ewald patrolling the net, and Ip, Zhang, and Wong adding their own seasoning.

With the win, Wootton completes its regular season with an 11-1 match record, and 35-4 set record, and a division championship. Anyone hungry for the playoffs to begin? See you in the gym on Wednesday, May 6. Opponent, site and time to be determined.
Posted by JH / VB Media at 9:24 PM No comments:

Legendary Penn State coach Joe Paterno noted "The will to win is important, but the will to prepare is vital."

For the Wootton boys volleyball team, the will to prepare for each match this year resulted in ten consecutive victories. Alas, that success hit a bump in the road Monday evening against a very talented and experienced Blair team considered by many to be one the best two teams in Montgomery County.

Blair and Wootton battled in a five game match that reached a level of intensity and competitiveness that tested each team's resolve. It was, aguably, the most fun the Wootton boys had all year. Each set was close, with Wootton taking the first two and Blair clawing back to take sets three, four, and five.

Having learned that their failure to win this match was not fatal, the Patriots begin their preparation for the playoffs. As division champions, and with a 32-4 set record for the season, Wootton is in a position to earn a high seeding and possible home court advantage in the early rounds.

Next up: The last regular season match will be at Rockville on Wednesday, April 29 at 5:15 pm. Playoffs begin May 6.
Posted by JH / VB Media at 9:04 PM No comments:

Wasn't pretty. Wasn't bad, either. Wootton faced one of the best digging teams it has faced all year. Magruder was relentless in their defensive play, reading Wootton's hitters and digging them consistently well. Wootton responded with enough resolve to win the match in three games, particularly the resolve to overcome its own drop in intensity from its previous four matches.

Next up: The Patriots will need to muster up its A game against what is arguably one of the two most talented teams in the County. Blair will bring it's powerhouse program, featuring several elite USA High Performance Team players, to Wootton's gym on Monday, April 27 at 5:15 pm. For the fans, this will be a great opportunity to see some very good high school boys volleyball players compete in a match with playoff seeding at stake.
Posted by JH / VB Media at 9:44 PM No comments:

Watch the setter on the team with the white jerseys. Clever fellow... not a strategy that I'd recommend ... but clever.

Wootton was happy to get this one over. After a looooooong warmup waiting and wishing for the whistle, Whitman and Wootton (whoa, what wonderful waxing with words, wha? whew!), took to the court in a competitive match that featured a tall, athletic, and well-coached Viking squad taking it to the Patriots with a wicked serving game and some impressive net play. Wootton held its own, making several key adjustments and playing from its strengths. Kevin Liang played perhaps his best match this season with his stellar attack. Once again, Tony Malinauskas, Kevin Wong and Alex Filie paced the Patriot attack with Aaron Yee taking his setting game up a notch. Eray Wang and Richard Fan played exceptional all-around games.

With the win, the Patriots completed their division schedule with a record of 7-0, and improved their season record to 9-0.

Wootton-Churchill. No need for extra motivation. Throw away the season records....they don't matter. This one is for bragging rights...in any sport. It just so happens that Churchill and Wootton have a good pool of volleyball talent to draw on, so this is a match marked on the calendar at the beginning of the season.

The Wootton boys got the upper hand this time, led by Tony Malinauskas, Kevin Wong, Alex Filie and setter Aaron Yee. Kevin Liang, Eray Wang, Zhenyang Zhang and Richard Fan were strong on the outside, with Wang also setting the third set. Wootton was able to play fourteen players in this match; Wootton's younger players filled in nicely during key moments of the match. Of note, freshmen Chris Wong, Michael Ip and Eric Zhang stepped up to the challenge presented by Churchill's well coached team of younger players. George Ewald and Xin Wang once again were solid in utility roles.

Next up: The Patriots return home to face Whitman on Wednesday, April 22 at 5:15 pm. The Whitman match will be the final division matchup before the Patriots complete the regular season with interdivision matches against Magruder, Blair and Rockville. 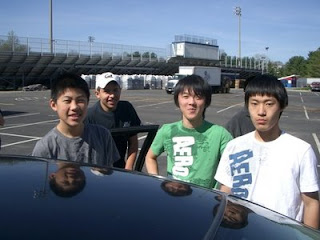 The Wootton volleyball team participated in the senior class and athletic program fundraiser by delivering mulch to homes on Friday, April 17 and Saturday, April 18. The Wootton Mulch Sale is a large operation ably handled by senior class leaders and sponsors. The volleyballers were happy to lend a hand. 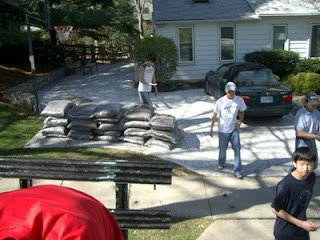 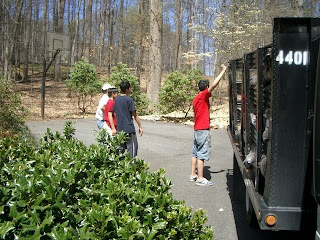 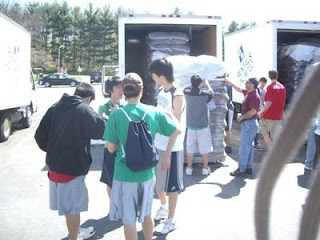 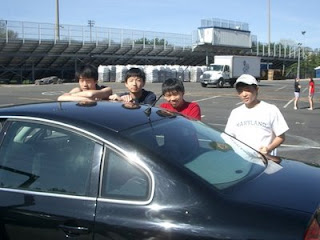 GO MULCH!
Posted by Unknown at 8:29 PM No comments:

The Ball State – Penn State men's volleyball match on Friday, April 17 is being televised over Indiana and the BSU website will have the feed in case any one wants to view it. Click here to access the BSU volleyball website.
Posted by Unknown at 9:28 PM No comments:

Fifteen days had passed since Wootton's last match. The team also "enjoyed" an eleven day layoff from practice during Spring Break before returning to the gym on Tuesday to prepare for a tough, athletic Wheaton team. The challenge was set: Would the Patriots pick up from where they left off the first half of the season and "enjoy" their return to competition in a key division match against the Knights.

Wheaton coach Tom Siegrist has a top-notch volleyball program in place and is set to challenge any team in the county. The Wootton players knew a formidable Wheaton team would give the Patriots a way to measure its own standing in a competitive division.

Sophomore setter Aaron Yee directed the Wootton offense in a solid performance, with the attack punctuated by senior Kevin Wong and junior Tony Malinauskas. Alex Filie, along with Malinauskas and Wong, led the Patriot blocking game. The four veterans were instrumental in maintaining team focus on the game plan while applying the pressure needed to neutralize Wheaton's talented offense.

Of note were key performances by Wootton's multi-dimensional players. Freshman Michael Ip, earning his first start of the year, and sophomore Eray Wang were key to the Patriots' effective defensive and transition game. Seniors Rex Hsu and Richard Fan added firepower to the Wootton attack. Sophomore Mark Yang, junior Xinyuan Wang, along with freshmen Eric Zhang and Chris Wong contributed to the well-balanced effort with their utility play, particularly in pressure situations.

Wootton continues its season on Monday, April 20 against rival Churchill in the first of three matches in one week against teams with notable talent. Monday's game at Churchill begins at 5:15 pm.
Posted by JH / VB Media at 8:45 AM No comments:

Patriots Prepare for 2nd Half of Season

A 3-0 forfeit victory at the expense of a short-handed Seneca Valley team put Wootton's match record at 6-0 for the season. At the half-way point of the regular season, the Patriots took a well-deserved Spring Break, and return to the gym on Tuesday, 4/14/09 to prepare for a very good Wheaton team at home on Wednesday, 4/15/09.

The Wheaton match has championship implications, as the winner will have the upper hand in the race for the division title and higher seeding in the playoffs. Wheaton has an imposing lineup that features some of the most talented players in the county....and they bring their 6-0 record to Wootton's gym in what promises to be tough match for the Patriots.

The season does not get any easier, as the Patriots play Churchill, Whitman and Magruder next week in a five day stretch that will test the team's resolve.
Posted by JH / VB Media at 10:15 AM No comments:

Email ThisBlogThis!Share to TwitterShare to FacebookShare to Pinterest
Labels: Spring 2009

Cross-town rivals Richard Montgomery Rockets and Wootton Patriots went head-to-head in an evenly matched contest Tuesday night, picking up from when they last met in an epic five game match in April 2008. With both teams playing at a higher level than 2008, RM and Wootton, along with Wheaton High School, are shaping up as favorites for the division title and hoping to compete for the county championship. The Patriots got the upper hand this time in a close match that featured a solid all-around performance by the Wootton starting six (though playing without veteran Richard Fan).

Of note, for Wootton, are the players that didn't see action against RM. The younger Patriots have found a way to use their considerable skills to push the veterans in practice. To prepare for RM's excellent defense, the Wootton starters had to compete with the likes of talented first year players Michael Ip, Chris Wong, Eric Zhang, and George Ewald, along with the steady play of veterans Xin Wang, Mark Yang and Zhenyang Zhang in practice. Not an easy task. Setter/Hitter Eray Wang, when not playing with Wootton's first team, is more than capable of beating them in practice. Tuesday's victory had its roots in a sweaty Wootton gym beginning in early March, where the team philosophy is put to practice: prepare with purpose, compete with intensity, and have fun!
Posted by JH / VB Media at 9:56 AM No comments: