Prior to a two week break from it's regular season, the Wootton boys took on the visiting Panthers of Paint Branch in a match that is becoming increasingly meaningful in terms of playoff seeding. Three quarters through the season, the Patriots sit atop the overall MCPS standing as one of two undefeated teams, squeezing out Springbrook based on overall set record of 27-1 versus 27-2. With three regular season matches remaining, Wootton has the slight upper hand to earn the top seed for a third consecutive year.

Pardon my attempt at British colloquialism.... Sophomore Jeffrey Qiu was bloody effective in unleashing a torrent of bombs against the Panther defense. Queuing up Qiu was sophomore setter Justin Fowler, who took on full time setting duties with the absence of senior Eray Wang. And the rest of the Patriots followed Qiu's lead, with everyone seeing action minus all-utility Wang and senior Mark (serve: BANG!) Yang and the late (but very much still alive) Nic Texier. Texier turned over the middle hitting reigns to sophomore Charles Wang and junior Alan "Jungle Man" Ngyun, who proved that volleyball is more than a recreational pastime played by beer bellied "bumpers and spikers" at the company picnic. Ngyun, in fact, showed up 24 hours earlier ready to play, demonstrating a commitment to the sport that ringers at the clambake are often lacking.

Henry Zhou, Michael Ip, Eric Zhang and Chris Wong played solid all-around games. Juniors Wong and Ip are establishing themselves as two of the premier defensive players in the county. Following in Wong's and Ip's footsteps are freshmen Ben Wang and Cary Chin, who are on a path to step up when the opportunity is presented to them. Freshman Paul Malinauskas played a fine match as a left-handed volleyball cruncher...perhaps the most talented Wootton freshman in years to crunch volleyballs left-handedly..... At least since now-senior Mark Yang and older Malinauskas brother Tony "the Phalanx" set foot on Wootton's storied volleyball court.

Senior Aaron Yee deserves a line all to himself for his usual stellar play. Good job Aaron. Bigger opportunities are on the horizon for you. All-County....been there, done that.

Wootton returns from it's two week layoff when it visits Seneca Valley in a 3:30 pm match on Wednesday, April 27.
Posted by Unknown at 7:17 PM No comments:

Magruder High School will host the MCPS boys volleyball championship match on May 12.  Wootton certainly would like to be playing in Magruder's gym on May 12, but first had to make the trip down Muncaster Mill Road to play the Colonels in a regular season match, where the home team has a tradition of playing very tough.

Each of Wootton's 15 players saw action on the court. The Patriots were focused throughout each set,and were able to reduce the number of unforced errors as the match progressed.

Patriots top Cavaliers 25-10, 25-19, 25-15.
Half-way through the 2010 and 2011 seasons, the winner of the Wootton-Kennedy match would take the MCPS Gold Division title. And for the second year in a row, Wootton has come out on top. With the win, Wootton High School boys volleyball has now earned three consecutive MCPS division championships.
Each of the fifteen players on Wootton's roster saw action, and were led by 4th year seniors Eray Wang, Aaron Yee and Mark Yang. Junior middle hitters Alan Ngyun (3 kills, .500), Nic Texier (4 kills, .428) and sophomore Charles Wang (2 kills on 2 attempts) patrolled the middle of the net for the Patriots, and junior Christopher Wong (4 aces) led the team in serving. Wong, along with fellow junior Michael Ip and freshman Cary Chin and Benjamin Wang led the backrow defense. Seniors Yee and Wang, along with sophomore Justin Fowler, shared setting duties. Seniors Yee (2 kills), Yang (1 kill) and Wang (3 kills on 3 attempts), and junior Eric Zhang, sophomores Jeffrey Qiu (3 kills, .750) and Henry Zhou, along with and freshman Paul Malinauskas (8 kills, .333), led the Patriot outside attack.
The Patriots continue their season with five non-division matches that will determine seeding for the playoffs. On Monday, April 11, the Patriots will visit the Colonels of Magruder High School in a 5:15 match, followed by the Gold Division champion Wootton Coed team.
Posted by JH / VB Media at 12:05 PM No comments:

Wootton tops Northwest for sixth consecutive victory 25-18, 25-19, 25-15.
The name jaguar is derived from the Native American word yaguar, which means "he who kills with one leap."
Thank goodness for Wootton that volleyball matches are best of five 25-point sets, because the Patriots saw a big, physical, athletic group of Jaguars that can leap and kill with the best of teams in Montgomery County. It would take more than one leap to stop the Patriots' serve and pass game on its home court, but the Jaguars have marked their territory as a team on the rise and ready to challenge for the MCPS Championship. They are a talented group that is becoming a very good team. Coach Rob Smith is making good things happen with volleyballs at Northwest.
As Patriots do, Wootton's boys volleyball team defended its home turf. Seniors Aaron Yee, Eray Wang and Mark Yang were once again a steadying force and stepped up in key moments when the Patriots needed points. Setter Justin Fowler dished out 28 assists as he directed the offense in all three sets. Yee (7 kills), Nic Texier (3 kills, .500) Paul Malinauskas (11 kills, .270) and Jeffrey Qiu (7 kills, .750) led the attack. Yee (5 aces), Malinauskas (4 aces), Qiu (4 aces), Fowler (3 aces), Yang (3 aces) and Henry Zhou (2 aces) kept the Jaguars on the run with their serving. Christopher Wong and Michael Ip, along with Yee, led the team in digs. Charles Wang came off the bench to strengthen the Wootton block against the high (and hard) hitting Jaguars.
Wootton is on the road on Wednesday, April 6, 2011 to face the Kennedy Cavaliers in a 5:15 pm match. The winner of the Kennedy-Wootton match clinches the MCPS Gold Division Championship.
Posted by JH / VB Media at 2:18 PM No comments: 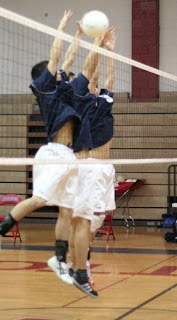 Wootton season record at 5-0 with 25-14, 25-8, 25-15 win over Churchill.
Churchill visited Wootton's home court in a Gold Division match that would determine division standings, playoff seeding and bragging rights among rivals. The Bulldogs pounced first, but the Patriots answered with an effective serving game where six different players fetching a total of twelve aces.
Seniors Aaron Yee, Mark Yang and Eray Wang dogged the Bulldogs serving and barked back, unleashing the Wootton offense that featured Jeffrey Qui leading the way with seven kills, followed by Paul Malinauskas with six kills (and 3 blocks). Of note was Nic Texier hitting 1.000 with 3 kills on 3 attempts. Juniors Christopher Wong and Michael Ip excelled for the Patriots in the back row. Eray Wang (6 assists) and Justin Fowler (22 assists) directed the Wotton offense.
Next up for Wootton is a home match against the Northwest Jaguars on Monday, April 4 at 7 pm.
Posted by JH / VB Media at 3:07 PM No comments: