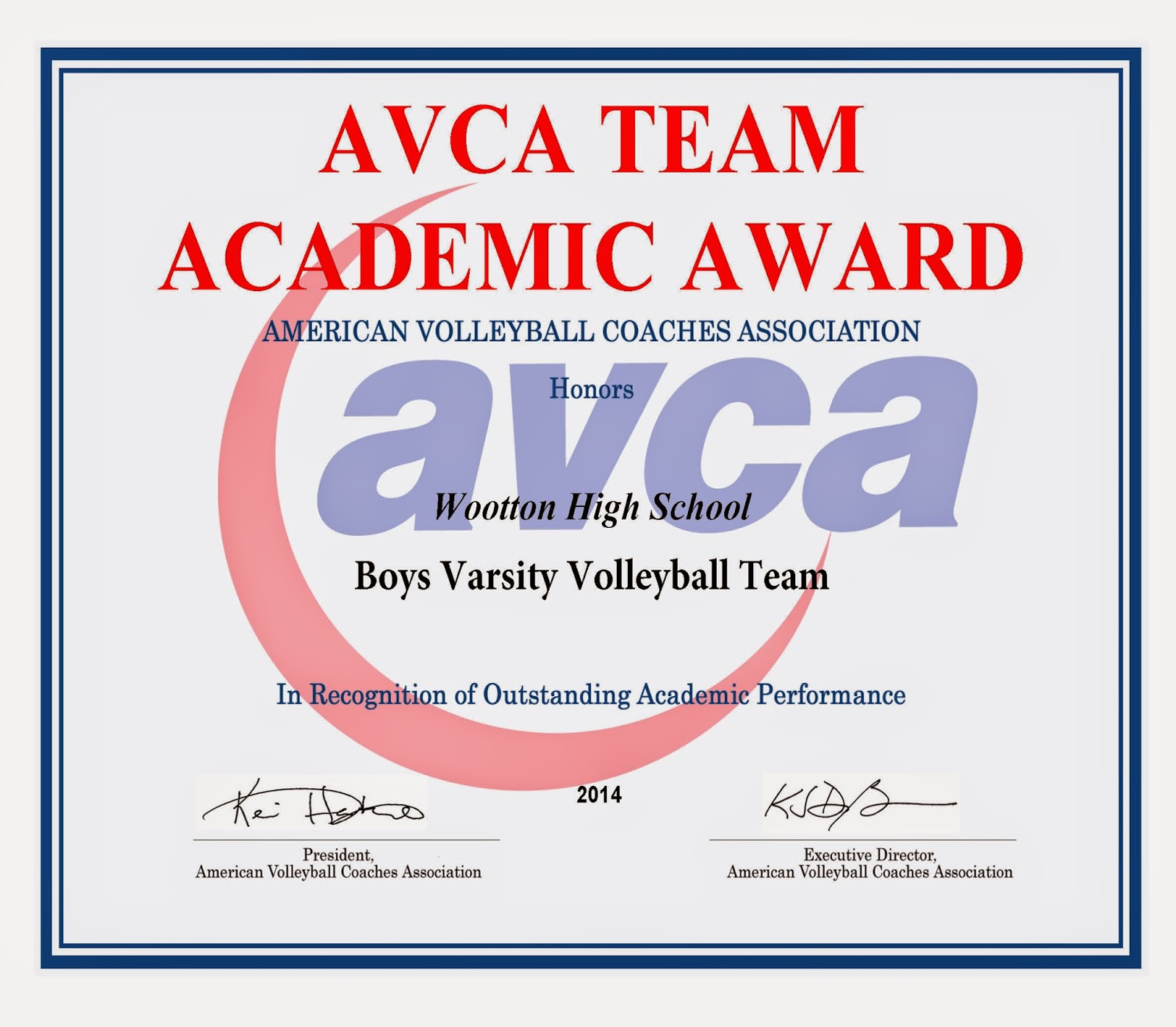 The Spring 2014 Wootton boys volleyball team has earned the American Volleyball Coaches Association (AVCA) Team Academic Award.  We're one of only 27 high school boys teams to be honored with this national award for excellence in the classroom (a team GPA of 3.3 / 4.0 or above).

This is the second consecutive year that the Wootton Varsity Boys Volleyball Team has earned this award.

The AVCA press release is below. The list of schools receiving the award can be found on the AVCA website here:  http://www.avca.org/awards/team-academic-award/

This award and a memorable 15-0 championship season affirm the success of Wootton's athletic program, and the boys are fine examples of the student-athlete ideal.  Seniors Paul Malinauskas (Player of the Year), Cary Chin and Ben Wang (All-County) were recognized by The Gazette Newspapers for their outstanding performances during the 2014 season. See http://www.gazette.net/article/20140528/SPORTS/140529151/1023/1023/2014-all-gazette-boys-8217-volleyball&template=gazette 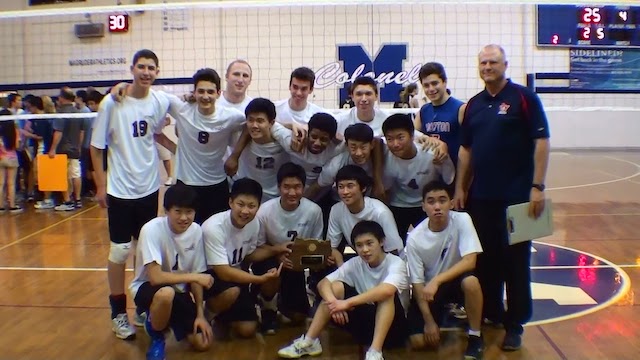 LEXINGTON, Ky. (August 4, 2014) - The American Volleyball Coaches Association (AVCA) announced today that 684 teams have earned the AVCA Team Academic Award for the 2013-2014 season. This number once again breaks the previous year's total of 623 and sets a new all-time high for this award.

The award, which was initiated in the 1992-93 academic year, honors collegiate and high school volleyball teams that displayed excellence in the classroom during the school year by maintaining at least a 3.30 cumulative team grade-point average on a 4.0 scale or a 4.10 cumulative team GPA on a 5.0 scale.

"Too often athletic participation is associated with academic underachievement and this stereotype is simply false when it comes to volleyball," said AVCA Executive Director Kathy DeBoer. "Couple the smarts represented by these teams with the competitive experience and team-focused training gained on the court and we have a potent formula for future leadership! What a significant contribution that is by their coaches and schools."

The AVCA Team Academic Award has become one of the AVCA's fastest growing awards programs, seeing an impressive surge in teams honored over the past several years. Since the 2000-2001 season, the number of recipients have increased every single year but one, while amassing an overall 500% increase over the span of the last decade. Since the award's inception in 1993, the amount of award winners has increased from 62 to its current number of 684.

NCAA Division I recorded their highest-ever total number of recipients, honoring 136 programs while NCAA Division II also set a new record by reaching a total of 95 honorees. NCAA Division III continues to set new records after 129 schools take home the honor with the Two-Year College category also surpassing their previous high of 16 with 23.

Prior to 2013-2014, only 18 teams had attained the pinnacle of volleyball success in both earning the AVCA Team Academic Award and winning their respective collegiate national championship in the same academic year. This year, the AVCA is proud to recognize four programs that excelled in the classroom and on the court: Concordia University, St. Paul (NCA Division II), Calvin College (NCAA Division III), Cowley County Community College (NJCAA Division II) and Clearwater Christian College (NCCAA Division II).


Over 1,000 different schools have earned the award in the program's 22-year history, with exactly 6,126 awards been given out in total. Additionally, there were six programs to earn recognition in the inaugural sand category.

Posted by Unknown at 4:38 PM No comments: