On the Road Again, Wootton Brushes Back Paint Branch, 3-0 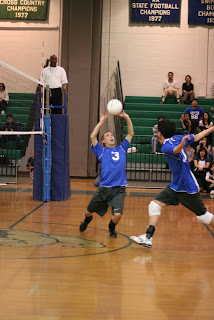 Patriots top Panthers 25-12, 25-14, 25-12
Wootton took the bus 15 miles across Montgomery County from Rockville to Burtonsville. For the first time this season, the team rode the school bus to an away match. It's an experience traveling on a school bus. Consider:
Based on it's season record to date, Wootton is perched high in the Montgomery County boys volleyball standings. The Patriots can see clearly where the team has been, and can look further down the road toward their destination and see some of the obstacles in the way. But, the team must be aware of the blind spots that can make a sudden and immediate impact.
One obstacle was Paint Branch, which has a history of success with its volleyball teams. The Panthers have the formula for success: talented players, good coaching and model sportsmanship. Having clinched a playoff spot, the Patriots saw an opportunity at Paint Branch to develop a few new lineups that will draw on the team's strength--it's depth and agility--to prepare for the blind spots and make a run deep into the playoffs.  Determined not to be weighed down by its success through the first eight matches, the Patriots showed it's agility against a tall, athletic Panther squad.
Setters Aaron Yee (Jr.), Eray Wang (Jr.) and Justin Fowler (Fr.) led a balanced Patriot offense that kept the pressure on the Panther defense, which was relentless in digging and returning Wootton's hits. Mark Yang(Jr.), Jeffrey Qiu (Fr.) and Eric Zhang (So.) stepped into the starting lineup and had outstanding all-round performances. Nicolas Texier (So.) and Christopher Wong (So.) continue their outstanding seasons at the net and in the back row, respectively. Libero Michael Ip (So.) asserted himself as a steady defensive specialist, and Elliott Liu (Jr.) used his quick arm swing to power the Patriots down the stretch in set three.
A good win is worth the bumpy 15 mile bus ride. The route the Patriots took to get there will go a long way toward delivering the season's (priceless?) payload.
The Patriots take a hop, skip and a jump up MD 355 to visit Gaithersburg in a 5:15 pm match
on Monday, April 26. (photo credit: Natalia Yee)
Posted by Unknown at 11:00 PM