Patriots Go to Work in Clash Against Titans 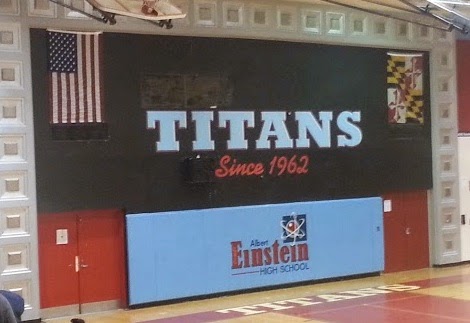 1.  Out of clutter, find simplicity.
2.  From discord, find harmony.
3.  In the middle of difficulty lies opportunity.

1.  Having navigated the clutter of bad weather, rescheduled tryouts and assorted other preseason noise, the Wootton boys finally had the opportunity to play a game of serve, block, pass, set, hit. Simple, eh?

2. Whereas the Patriots clashed against teammates in competitive preseason training sessions, that discord turned to team harmony against a common foe in Einstein's gym. Competition in the practice gym sharpened the Patriots' focus against a tall, athletic and well-coached Titan team. Every Patriot earned court time to add their note to the harmony.

Seniors Paul Malinauskas and Ben Wang paced the Patriot offensive attack choreographed by senior setter Cary Chin. Senior David Li was strong off the bench as one of the cadre of hard-hitting outside hitters, including juniors Mark Pang, Andrew Merchant and Jeremy Chung.

Sophomores Jimmy Ho and Nathan Xie began their Wootton volleyball careers smashingly as left-side hitters while Justin Wu picked up from last year as a defensive specialist, then adding few rotations at middle blocker to his repertoire.  Freshmen Omar Nunez and Victor de Avila were impressive in the middle.

A man who has a school named for him (I know, there is more to Albert Einstein's legacy) must know a few things about how the world works. Albert Einstein would have been a good volleyball coach.  He not only would follow his own rules of work, but he would also consider space and time in relation to each other to run an effective quick tempo offense.

The Patriots return home against Quince Orchard on Monday, March 24 at 5:15 pm.
Posted by Unknown at 10:00 PM